In order to reconceal HG Wells and E Rice Burroughs, and drive them both to my personnal setting of VSF, I've been working on the thing considering the many cogs martian races are within the bigger picture. It appears melting the two mythologies is in fact pretty easy, basing on a simple reorchestration of the timeline, and crossing the tentacled brain monsters Wells imagine with the tentacled brain monsters ERB did, the Kaldanes. Once you consider Martian invaders were but Kaldanes, driven by both the fear of Earthling and the chance to take advantage of Earth ressources (including humans as slaves and food) to rebuilt their lost kingdom, 50% of the job's done.
Further contribution to my own obsessions in binding VSF to some steampunk material (I hear you scream 'heretic!'), Rykors would be conceived as mechanical  rather than organic. 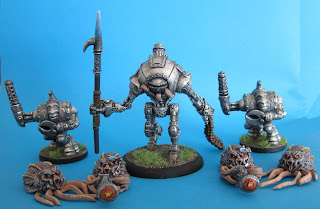 Here's a first collection of pieces to start a Kaldane party: 2 Kaldane scorchers, held by puny Kaldanes and designed to fire plasma beam, melting any opponent; One Kaldan on Rykor (basicaly, some Privateer Press warjack with added tentacles) equiped to grap some food or guinea pigs among humans, and two mechanical constructs. In order to match Wells' images, I had the whole mechanical stuff painted in bright metal, a color I'll widely use with other Kaldan stuff (as tripods), but also for my red martian forces.
Publié par Pench's Lair à 16:28